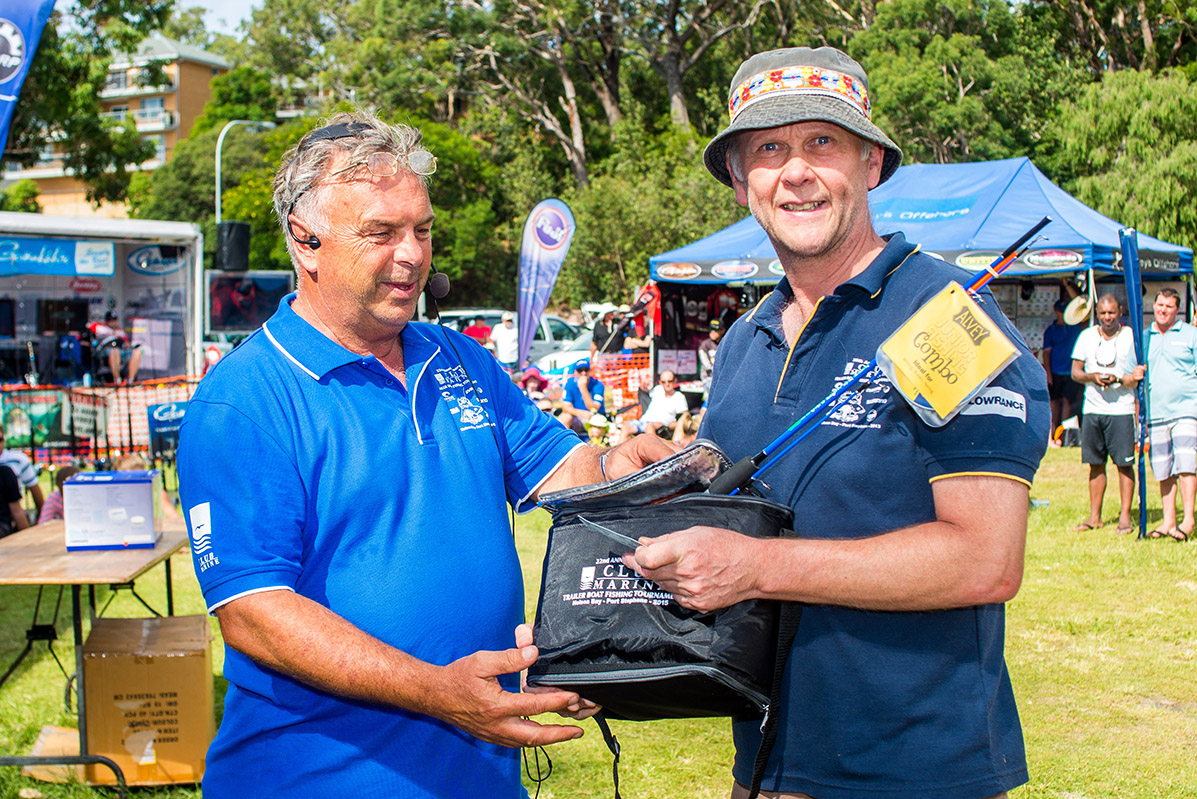 Tournament Director – all correspondence to:

Tournament Officials: Nominated members of Shoal Bay Fishing Club. In the event of any dispute related to the Tournament the Officials decision is final.

– Entry is open to members of the public agreeing to be bound by the Tournament Rules and is not restricted to members of fishing clubs or organizations.

– To be eligible for points, an Angler must hook, strike, fight, and bring the fish to the boat to be tagged, netted, or gaffed without assistance including anyone else touching the rod or reel.

– The fish must be caught during tournament time and within tournament boundaries.

Entry is restricted to trailer boats – defined as any vessel capable of being transported by a NSW registered trailer being towed by a conventional motor vehicle including 4WD upon NSW public roads up to a maximum beam of 2.6 meters.

– This fee may include food and refreshments as may be provided by the organisers.

– A Late Entry Fee may be charged for entries received after these dates. The late entry fee is $170 per Senior and $80 per Junior.

3rd Party Property insurance at a minimum is required for all competing boats. Insurance policy proof & valid and current policy details must be provided as part of each entry.

– Angler ID cards (to be collected at registration) must be presented to any Tournament Official on request and prior to any fish weigh in or prize claim or for any other claim such as food or refreshments as may be provided.

– Anglers must be present and produce their own Angler ID card to be eligible for any Lucky Draw Prizes.

– Secondary proof of ID may be requested for any prize collections.

– All boats must comply with the relevant NSW Maritime safety regulations current at Tournament time.

– Boat and crew safety is the responsibility of the skipper of the vessel.

– The decision to enter, compete, and fish is the decision of the competitors.

– Boats must be launched and retrieved within Port Stephens or within 12 kilometres by road from Tournament Base.

– Marine Park boundaries and usage regulations must be obeyed. Details at www.mpa.nsw.gov.au .

Anglers must hold relevant and current fishing licenses, permits, etc as may be required by NSW Laws. Details at www.dpi.nsw.gov.au/fisheries .

Prior to starting fishing, intending entrants MUST check & register their attendance at the Official Tent at Tournament Base. Prepaid Tournament T-shirts and Caps will be available at Registration.

– Lucky prize draw may be held before & immediately after the briefing.

– Lucky prize draws will be held immediately after most people are fed.

– Close of fishing 1200. Anglers must be in the official Compound prior to 1200 sharp Sunday for their fish to be eligible for weigh in.

– The Official Award Ceremony will commence at approx 1330

– Lucky Prize Draws will be held before during & after the Awards.

– The final major Lucky Prize will be drawn immediately after the Awards.

Individual prizes will be awarded to the angler/s (Senior & Junior) who over the Tournament weighs in the heaviest of the following eligible species:

Species may be added or deleted at the Organisers discretion.

Senior and Junior Anglers – only the top 3 fish in each species are eligible for points.

Competitors will be advised of any changes at the time of Registration.

For the purpose of this Tournament the Organisers may impose minimum species length eligibility above that set by NSW Fisheries. These lengths appear alongside the eligible species above. Please visit dpi.nsw.gov.au/fisheries for the latest statutory species and bag limits.

Titles will be awarded to the Senior & Junior Anglers who over the Tournament amass the most points counted as follows:

1st Heaviest of a species: 5 points

2nd Heaviest of a species: 3 points

3rd Heaviest of a species:  1 point

In the event of a tie, the winner will be the first person or boat to reach the winning points.

Junior Anglers – to spread the prize pool & encourage Juniors, species prizes will be limited to two per Junior angler. Where a Junior angler wins more than two species awards, their two highest placed fish will be awarded prizes. Their eligible catch points will still be allocated towards Champion Junior Angler (and Champion Boat if applicable) for any additional point scoring fish. However, the prizes for those additional fish will be awarded by way of a lucky draw involving all Junior anglers that are entered and present at the Sunday Awards Presentation.

Titles & prizes will be awarded to the boat that amasses the most eligible points as detailed for Champion Angler above. Only the top 3 fish in each species (whether caught by a Senior or Junior Angler) will be awarded points for “Champion Boat”.

3rd Party Insurance (at minimum) is compulsory for each boat. For the best coverage click here. Keep your policy number handy when you enter.